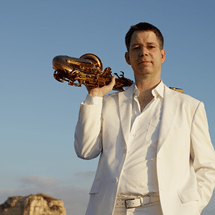 Thomas Hornig is a professional saxophonist and professor who has educated countless students on the art of playing the saxophone.

After studying jazz at the University of Minnesota, serving as a musician in Berlin for the US Army, and four years of study with professor Alain Bouhey at the Ecole Normale de Musique de Paris, he became the first American to move to Lebanon and ended up breaking the US embargo.

He has taught at the Lebanese National Conservatory of Music and eventually became the principal saxophonist for the Lebanese Philharmonic Orchestra (LPO), performing with a long list of guest conductors.

He has performed for the LPO over 30 times over the years. He's performed in works such as Bizet’s L'Arlésienne and Rachmaninoff's Symphonic Dances.

One of his proudest achievements over the years was a production, two and a half years in the making, which featured Charbel Rouhana (Oud), Grammy-winning arrangers and the LHNCM Big Band. Featured on Al Jazeera, this performance was the first time in history that the Oud (oriental lute) was featured with a big band for a full concert. His work with the Lebanese National Conservatory faculty big band lasted 10 years during which he was often responsible for creating opportunities to perform at gala events and music festivals.

As an accomplished saxophonist, he wants to pass on its soulful sound to aspiring musicians. He believes music connects us to the wider world and brings people together to celebrate a common interest.