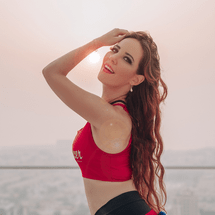 Shayma is an Argentinian professional belly dancer, choreographer, and teacher. Her unique style mixing the golden era oriental dance with a modern approach has taken her art around the world. She has performed all around the middle east for more than 12 years in countries like Lebanon, Tunisia, Syria, Jordan, UAE, Kuwait, Qatar, Yemen as well as other countries like France, Spain, Netherlands, Turkey, Malaysia, USA, and Pakistan. Shayma is a charismatic and passionate performer, her strong movements and energy will mesmerize your audience.

Shayma found her passion in teaching when she opened her own dance school in Argentina in 2007. She then continued teaching the art of belly dancing here in the middle east.

​Her dance career started in 2000 when she began performing at Lebanese restaurants in the city of Buenos Aires at the age of 13. She quickly became famous in her city at a very early age with tv appearances and shows in different theaters, restaurants, and events. Between 2001-2008 she studied all kinds of dance styles and musical theater. Ballet, Tango, Hip Hop, Contemporary, Modern Jazz and more.