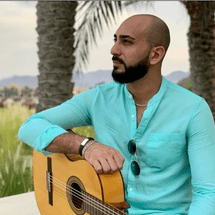 Daniel's passion for music and flamenco was influenced by his cousin at the age of 14. He decided to get a guitar and discover this style of music. After years of dedicated practice, Daniel became one of the founders of the Lebanese flamenco band Rojo del Libano along with his cousin.

Years later, Daniel traveled to the United States to enhance his music career and graduated from Mitchell College North Carolina, USA where he studied Fine Music Theory and Form. Meanwhile, he performed in multiple restaurants, venues, and hotels around the American east coast and collaborated with different artists to gain experience and knowledge in music production.