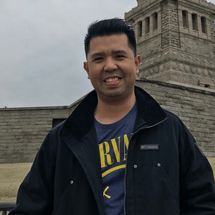 Carlo discovered his talent and passion for guitar and rock back in 1993 during his high-school days in the Philippines. He played lead guitar on a few bands until he finished college, won awards on band competitions and gained recognition.

Through the years, his musical influences varied from '80s and '90s rock, Heavy Metal, Alternative Music, and even Glam & Pop Rock. He believes that these genres will bring the best out of anybody's guitar potential, prowess, and arsenal. As a guitar player, he looks up to virtuosos such as Paul Gilbert, Eddie Van Halen, Darrel Lance Abbot, Vitto Bratta, Slash, and Steve Vai, which have heavily influenced the way he plays.

His passion is to share his talent to those who want to discover their hidden capabilities, gain more self-confidence, develop attention to detail, unlock their musical creativity in the process, or just simply learn how to play the guitar.

1-on-1 Guitar Lessons with Carlo Ceasar