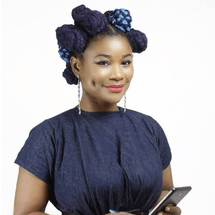 Queen Ede is the Creative Director and Founder of Land of Ede. She is a multiple award winning Nigerian Designer, Creative Director, Fashion and Entrepreneurship Trainer, Partner at TwentyFour54 Abu Dhabi Media Zone and Member of the Dubai Design and Fashion Council (DDFC). From Edo State, she is a B.A English and Literature graduate of the University of Benin.

In 2006, She officially incorporated her brand as Joan's Designers and later as Land of Ede in 2018. What started as a small “Needle-work play” she put on as a little girl is now fast becoming a business empire. Over the years, celebrities and media companies have prided themselves in her services, and she has costumed several artists, music videos, TV shows and media personalities.

In March 25th 2011, at the Oba Akenzua cultural center Benin City, Nigeria, she got her first major award as Niger Delta Designer of the year 2011, presented to her by Clasique Image Int. and Kings Unit Entertainment, through popular song artist Sunny Neji, right in the presence of The State Governor and other great personalities within and outside Nigeria. In December 2012, she was given an honorary award as the ‘South-South Best Designer 2012’ by The Merit media award organization under the Nigerian Union of Journalists. Also Ii 2012, she became the face and Brand Ambassador of Photospot International. In 2015, she was appointed as the Face of Miss Edo State Beauty pageant, which is annually organized by the National Television Authority (NTA) and Gotham city Entertainment. On the 10th of November 2017, she was awarded as 'Best Women's Wear Designer of the Year' at the 7th Edition of Green Naija Fashion Show and Awards 2017. In August 2018, Queen Ede won the H.A.M.A 2018 Creative Arts Award. She has taken the role of chief-judge in several beauty pageants, runway shows and young designers competitions and still works with media brands till today.

For Queen Ede, Art and Fashion Designing has always been a part of her life. While growing up, she watched her mother make beautiful fashion pieces for herself and her sisters. As an inquisitive child, she would ask questions about her choice of colors and designs, and was soon cutting thick paper and old wires to make shoes and other art crafts at the age of 9. Her grandmother also worked in a fashion house and would always bring pieces of fabrics for her, which she used to make clothes for her dolls and fancy little purses for herself and her friends.

Queen Ede believes that Art is powerful because it is inspirational and relates to all areas of human existence. She loves to design everything from clothes, houses, music, food, to people. She loves fine things and beautiful prints and textures, and finds the transformation that her work brings on people to be truly priceless. In this way, Queen Ede creates opportunities for those with a passion for Fashion, Art and Entrepreneurship. Together with her team, she offers young people the platform to actualize their dreams. She is passionate about using her creativity and platform as an International Artist and mentor to positively impact nations and students.