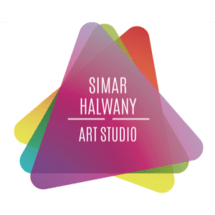 Simar is a Lebanese visual artist specialized in painting with oil, acrylic, pastel, and watercolors. She uses various techniques, such as mixed media, allowing the viewer to experience her vision of joyful and beautiful surroundings. Simar has a master's degree in illustration from  Mixmaster Illustration in 2015, Milano, Italy, and a B.A. from the Fine Arts Department (Beaux Arts) in 2000 specializing in Painting and Etching.

In 2008, she became a member of the Emirates Fine Arts Society, participating in the annual Arts Exhibition at the House of Arts in Sharjah, UAE. Since then, she has been working as a freelance illustrator for children's books with many well-known authors from Lebanon, Gulf, and the Middle East.

Simar's love for the children led her to compassionately write and illustrate 'BOO.' It was her first adventure as Author/Illustrator in 2017.

A number of her books are award-winners like the book ‘Al Feel Al Rassam’ for the best book of the year 2017 with ‘Al Fikr Al Arabi 21’. She was also shortlisted for the best illustrator with Etisalat Award for Arabic Children’s Literature 2017 for the book ‘Shajarat Al Zaytoun’.

Her illustrations of the book ‘A Fish I Dreamt Of’ was on the international honor list for the best illustrator 2016 with LBBY at Bologna Book Fair in Italy. The book ‘Samakati was as well awarded and made it to the honor list of ‘Ketabi’ awards in November 2013, by ‘Al Fikr Al Arabi 21’as the book was voted by children to win the prize for best illustrations.

Her book “BOO” and its original illustrations are being displayed at Stiftung Internationale Jugendbibliothek. “From Marrakesh to Baghdad” art exhibition of Illustrations from the Arab world, Munich, Germany, October 2019 - April 2020. The exhibition will be displayed in various European cities until December 2022.

Her paintings were displayed in many art galleries and exhibitions in Lebanon, Germany, and UAE such as the "Memory" exhibition at Sharjah Art Centre in 2009. She is a visionary artist who creates a wide variety of images and enjoys experimenting with different materials and styles.

Online Class: How to Illustrate a Character

Quick View
ONLINE
Online Class: How to Illustrate a Character

Online Class: How to Illustrate a Children's Book