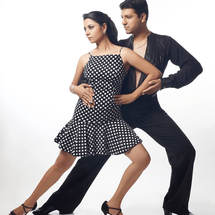 Shannon and Rajeswari are trained in competitive and social dances, and have competed in Asia & Europe. They are pioneers in teaching Bollywood fusion with Latin-American styles.

Some of their acheivements include:

- Rajeswari is a TedX Speaker for Dancesport

Shannon & Rajeswari have worked with several Bollywood celebrities such as Ranveer Singh & Vaani Kapoor for the Blockbuster movie Befikre, as well as British primetime series The Good Karma Hospital and as Latin Choreographers for the BBC Netflix Series "A Suitable Boy" directed by Hollywood Director Mira Nair.